with a four-storey Renaissance lookout tower 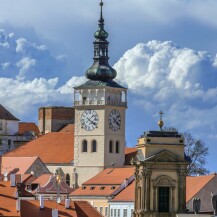 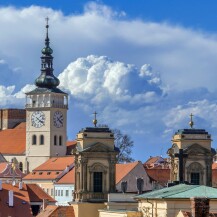 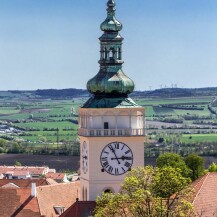 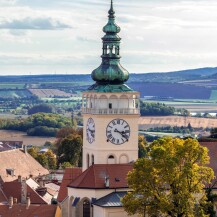 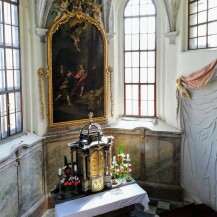 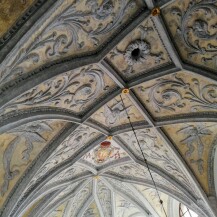 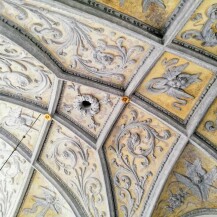 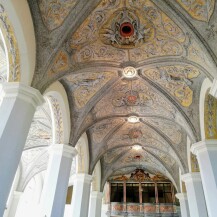 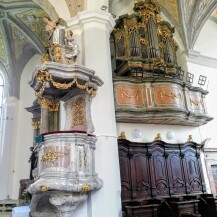 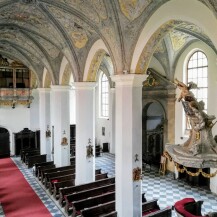 with a four-storey Renaissance lookout tower

The church was erected in the place of the former earliest Romanesque church whose existence is assumed since late 12th century. The core of the present building of the church comes from early 15th century. The overall appearance is the result of reconstructions in 16th and mid 17th centuries. Since 1625 the church has been seat of the Collegiate Chapter.

open during services and on request
An overview of services can be found at www.farnostimikulovska.cz

The present St. Wenceslas´ Church is situated in the original village, which later became part of Mikulov. The existence of the Romanesque church in the same place is assumed since late 12th century, but documented in writing since 1276. The original appearance of the church is not known. The present building core dates from early 15th century and shows influence of Petr Parléř´s style. Completion of the church construction was interrupted by the siege of the town by the Hussite army in 1426, when the new building was burnt and destroyed.

For a long time the church was only provisionally repaired and burnt again in 1584. A year later, already under the Dietrichsteins, significant representatives of recatholisation, the church tower was extended with a residential floor with the apartment of the tower guard and an arcade gallery. The construction was completed around 1640 when the three naves were provided with a new vault with stucco decorations, a new vestry with music choir was built and the Gothic windows were adapted to the present appearance. Marian chapels were attached to the sides of the three-nave main building and an oratory for the nobility with an enclosed corridor towards the chateau was built then. In 1642 a large bell was installed in the tower with the relief of Small Calvary and the figure of Prevost Jiří Otislav of Kopenice. At that time St. Wenceslas´ Church had for several years been the seat of the Collegiate Chapter, founded in 1625 by František, Cardinal of Dietrichstein.

The Collegiate Chapter has been active in Mikulov since. In the years 1762-1775 the church interior was newly equipped, including a new organ, and the tower roof was reconstructed. In 1846 the church itself was provided with a new roof too. The gemstones of the interior decorations and equipment include the high altar with the monumental painting of St. Wenceslas Murder by František Anton of Freenthal and the statuette of Madonna and Child of cedar wood in the altar of the northern chapel of Virgin Mary of Loretta, originally located in the Loretan church of St. Anne. Since after 1784 the northern niche of the choir has been decorated with marble epitaphs of Václav Vilém Popel of Lobkovice (+1626) and his wife Markéta Františka, born Dietrichstein (+1617), with portraits of the two deceased. Along the outer wall of the church there is a row of tombs from the latter half of 16th and former half of 17th centuries.

The Tower of the Church of Saint Wenceslas in Mikulov

There are three exhibition rooms in the upper storeys of the tower. The first features an exhibition about the history of the tower and church, including photos. There is a photography exhibition in the second room – currently showing photographs of Mikulov, Pálava and the surrounding area by Jan Miklín. You can see drawings by beginning artists in the third room.

The tower’s arcade gallery provides a unique panoramic view of the whole of Mikulov and the surrounding area far and wide. You don’t have to leave the centre of town – the lookout tower can be found right in the square on the site of St. Wenceslas Church. You can, moreover, use a telescope free of charge to see even further. There is currently a retail exhibition of the photographs of Jan Miklín in the tower featuring motifs of Mikulov and Pálava and paintings by local artist Jarmila Červená and untraditional artist Jiří Prokop.

The original Gothic appearance of the tower from the beginning of the sixteenth century has been preserved only on the ground floor and first floor as the result of the fire of 1584. The church tower underwent further modifications in the eighteenth century. It acquired a new entry with the construction of an annex with a staircase, and in 1768 the tower acquired a new cupola which provides the finishing touches to the characteristic appearance of Mikulov’s church tower to this day. The storey with the gallery was once guarded by a tower guard who protected the town against fires and approaching enemy troops. When you ascend the tower you will pass by the tower’s enormous bells, the oldest of which dates back to 1615. A cimbalom located in the tower copula is, however, used today to strike the hour on the tower clock.

The important Collegiate Chapter of St Wenceslas´ Church in Mikulov was founded by Cardinal František of Dietrichstein with Pope ´s permit in 1625. The purpose to be implemented by the Provost and four canons was spiritual service to the citizens and regular prayers. In 1772 following release of the new Chapter Statute the number of members of the Chapter was increased to eight. To date the Chapter has been headed by together 25 Provosts, a number of them significant figures of their time, and others providing material equipment and having reconstructions of the Chapter building made. In addition to the Mikulov Chapter there are another three in Moravia: in Brno, in Olomouc and in Kroměříž.

The Important Collegiate Chapter of St Wenceslas´ Church in Mikulov, as the complete official title goes, was founded with permit of Pope Gregory 15th by Cardinal František of Dietrichstein by Foundation Charter of 22 August 1625. The first superior – Provost – was Jiří Otislav of Kopenice, before a Mikulov priest and dean (these offices were later combined with the Chapter Provost position). The tasks of the Provost and the four canons included spiritual service to the citizens of the town in the first place, and also organisation of regular everyday prayers. Material equipment of the new institution was provided by the Cardinal from his own resources and later further extended by other Provosts. The foundation of the Chapter, the fourth Chapter in the country, helped increase prestige of Mikulov, then the biggest peasant centre in Moravia. The founder of the Chapter ordered the Mikulov Provosts to be appointed on the basis of proposal from the owner of the estate. As for the Church hierarchy the Chapter was administered by the Olomouc Bishop, or Archbishop, until 1783, when the administration was transferred to Brno. A year later a second parish was established in Mikulov by St. John the Baptist ´s Church, and the function of spiritual service provider was performed by one of the members of the Chapter there. Since the very beginning the Provost and the canons lived in houses in the close surroundings of St. Wenceslas´ Church, largely reconstructed to their present shape in late 17th century by Provost Petr Reharmont. After release of the new Statute of the Chapter in 1772 the number of its members was increased to eight.

To date the Chapter has been headed by together 25 Provosts, a number of them significant figures of their time, including the last two, Vladimír Nováček and the present Provost Stanislav Krátký, both of whom got to know the life of Communist political prisoners. The most outstanding Provosts of the past include for example Mikuláš Dufour of Vionna (Provost in the years 1781-1809), sent by Emperor Joseph II to calm down the excited religious situation in Lower Austria, and working also as serious alchemist helping Princess Maria Kristine of Dietrichstein in her laboratory at the chateau, or Vincenc Weintridt (Provost in the years 1843-1849), a major thinker and theologian, or the writer Karl Landsteiner (Provost in the years 1886-1909). Other Provosts improved the material condition of the Chapter and had the Chanter and the church reconstructed. On the other had, there were also a number of Provosts who used their position for material advantage only. 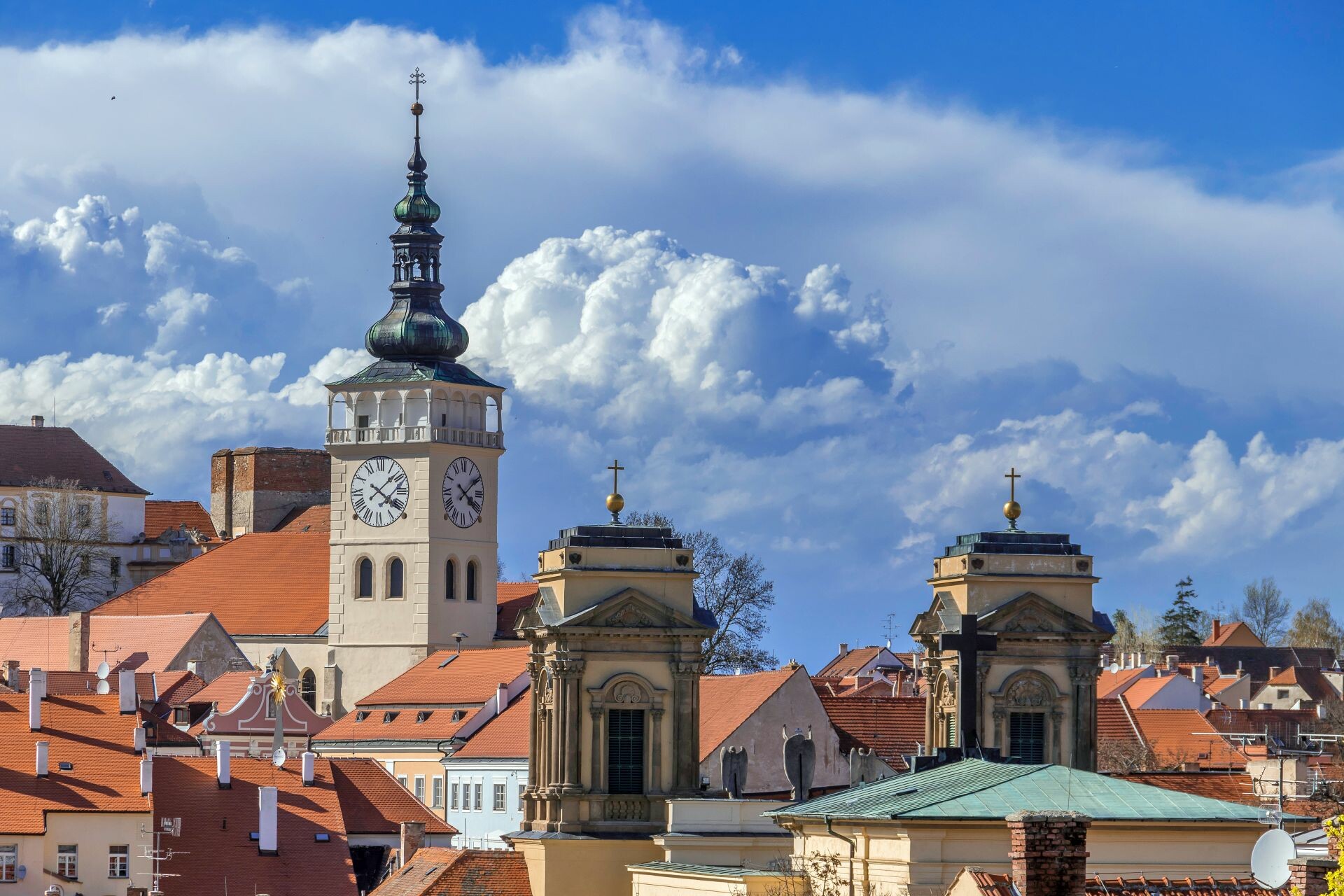