part of the urban conservation area 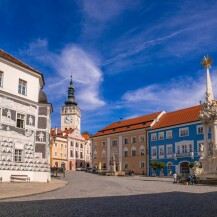 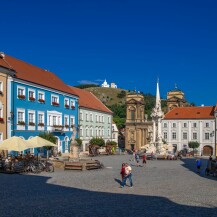 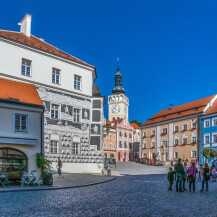 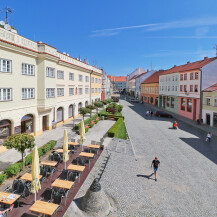 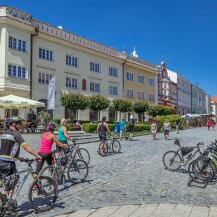 part of the urban conservation area

The natural centre of the town acquired its present appearance in the last decades of 16th century when the square was transferred to the close proximity of the chateau entrance. In the course of the former half of 17th century a number of renaissance houses were built there, most of them preserved nearly unchanged till the present day.

The most important of them include the “U Rytířů” [Knights´] house with graffiti decorations and the so called canons´ house. The square is dominated with a fountain and the Pomona statue with the horn of plenty dating from early 18th century and the monumental Baroque Holy Trinity Statue of 1723-1724. The historic centre of the town has been urban reserve.

Mikulov was founded by an ancient Viennese path from south to north. The original settlement was a little aside, in the place of the present “Česká” street. The present town centre with the square below the chateau hill only originates form the 13th century colonisation period. The original square was a conically widening street with a marketplace (in 1279 Mikulov was granted the privilege of holding weekly markets), situated in the southern part of the present Square and reaching as far as the present “Vídeňská” street. Houses were only built along the perimeter of the marketplace and all houses were made of timber. The present ground plan, with the regular shape of the square with St. Venceslas´ church in the northern corner is the result of the fundamental reconstruction of the town following the large fire in 1584. The thoughtful project resulted in a shopping street on the way to the chateau with large burger houses, and the town hall and the Loretan church of St. Anne. The whole town centre was shifted to north-east. The new houses were built of brick and stone. The oldest preserved house cores in the square come from renaissance, the period when the abovementioned new town was built. The original houses are not preserved, even though respecting the original mediaeval plots can be assumed in some places. The original idea probably was to surround the whole square with an archway allowing for undisturbed walking in bad weather. However, the intention was only implemented in the house front adjacent to the chateau hill.

The appearance of the town was significantly affected by the destructive fire on 14 September 1784, destroying over 350 houses. The cause was lack of carefulness of a cook in the bank office building, where hot fat ignited the muckheap of the neighbouring post office (there was the town hall of the other side). The most severely affected house was St. Anne ´s Church, only in the middle of the following century transformed to the Dietrichstein family sepulchre, and the adjacent Capuchin monastery, transformed later to residential houses. The fire, despite the quick reconstruction of the damaged houses, changed the appearance of the southern part of the square completely into the present shape.

The most attractive house in the square is the corner house (no 11) dating from before 1591, with the four-sided corner alcove. Up to the first floor (the second floor was only built in the latter half of 19th century) the house is decorated with renaissance graffiti with biblical and antiquity scenes dating from the first quarter of 17th century. Another remarkable feature of the house is the arcade gallery in the yard.

Around 1700 the upper part of the square was equipped with a fountain in the shape of a polygonal stone tank with prismatic pillar and gargoyles in the middle. The fountain was the source of water for the inhabitants of the inner town. The pillar holds an allegoric statue of Pomona with the horn of plenty and the shield with the Dietrichstein family coat of arms.

VThe bottom part of the square is dominated with the monumental Baroque column of Holy Trinity dating from the period 1723-1724, sometimes also called Plague Column. Prince Walter Xavier of Dietrichstein had the column made by stonecutter Andreas Steinböck on the basis of graphic design by A. J. Prenner. The statues (St. John of Nepomuk, St. František Xaverský and St. Karel Boromejský) are the work of Ignác Lengelacher. The monument erected over a hexagonal base with several steps with a triad of Tuscan pillars is crowned with a trihedral pyramid with the symbol of Holy Spirit standing on the heaven sphere with clouds and little angels and with the statues of God the Father and God the Son Jesus Christ. The column was repaired in the years 1897 and further in 1997-1998.

In the opposite corner of the square (house no 4) František of Dietrichstein had a single-storey house built on several present plots for the canons of the Mikulov chapter founded in 1625. While the exterior of the house keeps its original renaissance appearance with fronts decorated with rustic graffiti, the interior was damaged by the destructive fire in 1784, when the house was burnt and subsequently completely reconstructed.

In 1606 Maxmilian od Dietrichstein sold to the town the unused building of the brewery to build the town hall there. Later the town hall was provided with a tower, which, like the most of the building, was burnt with the fire of 1784. The present appearance of the town hall dates from 1929.

The two-storey house with a passageway was used since 1592 as post station on the important trading path from Brno to Vienna. The present design of the house is the result of the classicist reconstruction following the fire of 1784. The Baroque yard wing was originally used as stables. The post office was seated in the house until 1914. After reconstruction in the latter half of 20th century the house was used by the town cultural centre and now the house has been interconnected with the town hall.

The core of the house dates from the renaissance period. The inn “U zajíce“ [At the Hare] reconstructed after 1688 was the seat of the salt office and the bank since the latter half of 18th century. This is the house where the cook poured hot fat out of the window to the muckheap of the neighbouring post office on 14 September 1784 so unfortunately, that he caused one of the largest fires of the town, destroying over 300 houses. After the fire the house was extended one floor and reconstructed in the classicist style. Before 1960 the house was the seat of the cistrict court and the prison. After that the house was reconstructed to serve the needs of the Secondary Agricultural Technical School.

After 1625 František of Dietrichstein had a single-storey house built by merger of several existing renaissance houses in the bottom part of the square next to the Capuchin monastery for members of the Mikulov Chapter. While the exterior of the house keeps its original renaissance design with rustic graffiti decorated fronts, the interior was damaged by the destructive fire in 1784, when the house was burnt down and subsequently completely reconstructed. The house underwent overall reconstruction in 1953 and another one was started in 2004.

In the course of construction of the Loretan church of St. Anne in mid 17th century a vestry with a treasury for storage of rare liturgical objects and material donations to the Mikulov Loretta was built. In the years 1678-1682 the treasury was reconstructed and provided with artistically valuable stucco decorations by Giovanni Castelli, preserved in the original form till the present day, even resisting the destructive fire in 1784. The representative ground floor hall of the treasury with barrel vault and lunettes and rich stucco décor is today used as exhibition hall.

The single-storey burgher house erected over two mediaeval plots was constructed before 1784 by the town fortified wall. The articulate classicist façade is decorated with a console plate with St. George´s statue.

The house in the western corner of the square by the entrance to the chateau is the result of the square construction in late 16th century. Before 1769 the house was owned by sculptor Ignace Lengelacher, the author of a number of sculptures decorating Mikulov. After that the house was used by officers of the Dietrichstein farm. After abolition of patrimonial administration and house became the seat of the District Governor. The present classicist design of the house dates from 1827-1828 and results from the reconstruction of 1952. Today the building houses the Music and Art School.

The house is a terraced two-storey house with excellent high baroque decorations of the main front. On the ground floor level the façade is emphasized with belt rustic work. The windows of both floors are protected with decorated forged reeve bars. In the niche of the volute front there is a statue of the Immaculate and on the top there is a statue of St. Florian. The structure of the ground floor within the scope of the vaulted rooms with cross lunettes documents the older renaissance core of the house, extended and reconstructed after the fire in 1784, when its preserved architectural design was completed including artistic decorations of the interior. The house is one of the most valuable historic monuments of Mikulo. The façade was renewed in 2006.

One of the oldest houses in Mikulov served a town baths as early as in the latter half of 14th century. The baths were still there in 1606, when the neighbouring house was sold by the nobility to the town for establishment of the town hall. The present ground plan of the house keeps the renaissance disposition of late 16th century, resulting from extension of the original mediaeval plot. The house was reconstructed after the fire in 1784, and again after 1945 to become a shop and a restaurant. Inside the house there is a tower of the town fortifications encircled with the house walls. The fortifications were cancelled in the years 1836-1837.

The late renaissance terraced house dating from the turn of 16th and 17th centuries keeps the original disposition. The passageway, closed with a barrel vault, leads to the inner yard, equipped on the first floor with Tuscan arcade gallery, closed with cross vault. The originally Christian owner was replaced with the Jewish community in 1798 with consent of the governors and the proceeds of the rent were used by the David Oppenheim Foundation for operation of the religious classroom bet ha-midrash.